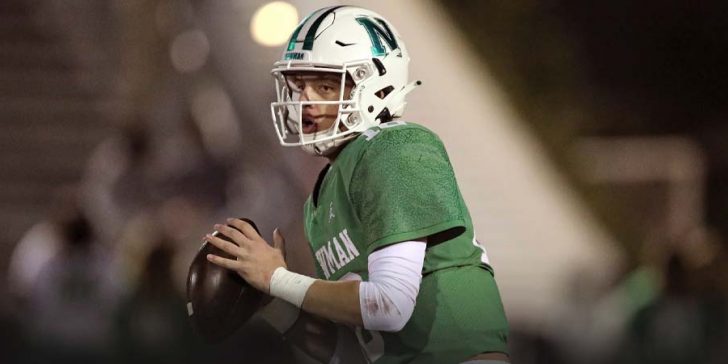 AUSTIN, Texas – The Texas Longhorns football program will be carried by one of the most highly rated recruits in all of college football for the next few years. Arch Manning, the nephew of Peyton and Eli Manning, received a perfect 1.000 recruiting grade and committed to play at the University of Texas.

With his commitment, oddsmakers were quick to post odds for his freshmen season and his college career. Some of the odds to look at involve Manning winning both the Heisman and National Championship as a freshman and also being drafted first overall in his NFL Draft class.

Arch Manning To Win Heisman As A Freshmen?

While many do shy away from freshmen QBs to win the Heisman award, it is not impossible and has happened on two occasions in recent years. In 2012, Johnny Manziel (+1200) of Texas A&M became the first freshman to win the award. Just one year later, Jameis Winston (+600) from Florida State followed up with a Heisman Trophy as well.

Manning is no stranger to putting up big numbers as a freshman as he went for 2,428 passing yards and 34 touchdowns as a high school freshman.

If Manning can show that moving up to the next level in his football career does not affect him and puts up even remotely close to what Manziel and Winston did in their seasons, then these college football odds will prove to be valuable. It is also worth noting that come Manning’s freshmen season, his odds to win the Heisman could be much shorter.

Similar to the Heisman Trophy, a freshmen QB leading their team to a National Championship does not happen often. In fact, it has only happened three times in history.

It came first in 1985 when Jamelle Holieway led the Oklahoma Sooners to a title. Jameis Winston struck again in 2013 when he led the Seminoles to a title after going in with +1600 preseason odds. The most recent freshman QB to win the National Title was Trevor Lawrence in 2016 and they opened up as the near favorites at +700 odds.

In order for the Longhorns to win the Championship in Manning’s freshman year, they would at least need to open up the season inside of the top-25 and defeat other top-25 opponents to try and get into the top-4.

Manning To Be Selected First Overall In The NFL Draft

Despite not being the most profitable odds on this list, they are surely the most valued at legal betting sites. These odds will more than likely not be at this value come the 2026 draft if things play out well for Manning. Manning also has history on his side with these odds being that both his uncles, Peyton and Eli, were both selected first overall.

Manning also has Longhorn history on his side as the school has seen three players drafted first overall including linebacker, Tommy Nobis in 1966, running back Earl Campbell in 1978, and wide receiver Kenneth Sims in 1982.