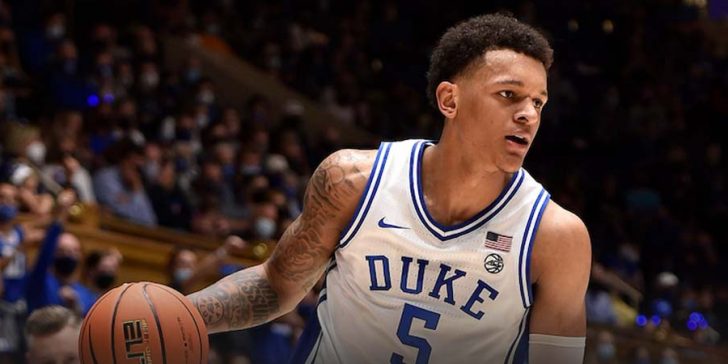 NEW YORK – The chaos surrounding the NBA Draft has already started the morning of with a major odds change in the first overall pick. The three names that have all been rumored to be selected with the first overall pick include Jamari Smith from Auburn, Paolo Banchero of Duke, and Chet Holmgren from Gonzaga.

All have been favored to go first at some point before the draft.

Fast track to Thursday and Paolo Banchero jumped from +1500 odds one week ago to now favored at -150. The shift also pushed back Jabari Smith from the favored spot at -165 to now +120.
Holmgren remained with the third shortest odds, however, sportsbooks show his odds to go first are not likely as they shifted to +800 from +125.

The Amazing Race: Banchero Vs. Smith

Although there were reports of the Orlando Magic having already locked Jabari Smith at the number one pick, it seems that those reports have since fallen through.

The Magic have been known to draft lengthy big men with their draft picks. For example, Jonathan Isaac, Mo Bamba, and Chuma Okeke. With that, adding Smith would just add to the abundance of players that have that same skillset making the case for Banchero much stronger.

Banchero’s style of play includes elite shooting from anywhere on the floor and the physicality in the paint that the Magic are used to. Banchero put up similar hustle stats to Smith that includes better rebounding numbers (7.8) and assists (3.2), and similar blocks (0.9) and steals (1.1).

He would also help the team add to their much-needed depth at small forward that includes second-year player, Franz Wagner, and NBA veteran Terrence Ross who they have been actively shopping in the trade market.

The Rise & Fall Of Chet Holmgren

When the odds opened, Chet Holmgren was the heavy favorite to be drafted first overall. However, that has since changed due to the actions that Holmgren has taken.

He has made it very clear that he would like to play for the Oklahoma City Thunder and get drafted second overall. In doing so though, he has refused his medical records to the Orlando Magic in hopes that they do not select him first.

The Thunder have shown no signs of them skipping over Holmgren meaning he will likely go with the second overall pick. With all unfolding, it is clear as to why his odds have gone from +125 down to +800.