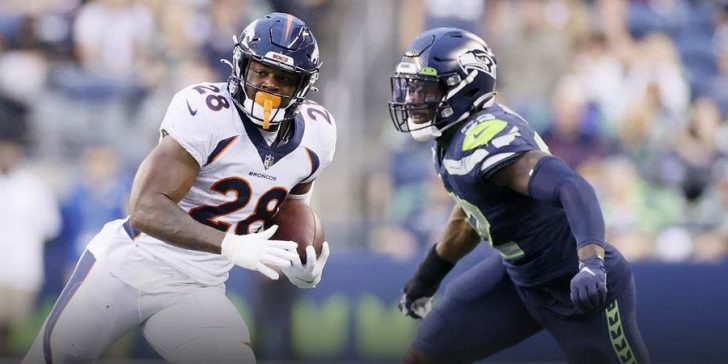 The Denver Broncos are 6.5 favorites against the Seattle Seahawks in Russell Wilson’s first game as a Bronco and Denver has -270 odds to win their opening season game.
Russell Wilson has -145 odds to throw two or more TD passes and -215 yards to run for over 12.5 yards during the game.
Javonte Williams has +700 odds to be the first scorer of the game and Rashaad Penny has +900 odds for either team.

SEATTLE – Russell Wilson is heading back to Lumen Field for the first Monday Night Football game of the 2022 NFL season as a Denver Bronco and legal sportsbooks have made the Seahawks 6.5-point underdogs.

These two teams have not met in the regular seasons since 2018 when the Broncos won by three and pushed the spread. During the 2021 season, Denver went 5-5 ATS as the favorite and 2-2 as the favorite on the road.

Russell Wilson had a shaky 2021 season that created injury and trade rumors but still managed to record productive stats in his 14 starts. The new Bronco’s QB threw for an average of 222.4 yards per game and 1.8 TDs per game last season.

Geno Smith has been named the starter for the Seahawk’s season opener and threw for 175 per game and five total TDs in his four 2021 starts. Legal NFL betting sites have given Smith -115 odds to hit either over or under for his 205.5 projected passing yards for the home game.

Smith also has +185 odds to hit the over on 1.5 total TD passes but is favored to hit the under at -250. There is value in this prop because Smith threw for two TDs during his last NFL start and is starting the 2022 NFL season with the confidence that the Seahawks are his team to lead.

The Broncos are expected to split the total snaps between veteran running back Melvin Gordon and second-year star Javonte Williams Legal sports betting sites have odds for both of their action, with Williams favored to score the game’s first touchdown at +700 and having the shortest odds to score anytime at +110.

Rashaad Penny is coming off a 2021 season where he only played five games but rushed for a total of 749 yards and 6 rushing TDs. He has +900 odds to be the game’s first scorer and +125 odds to score during any point of the game.