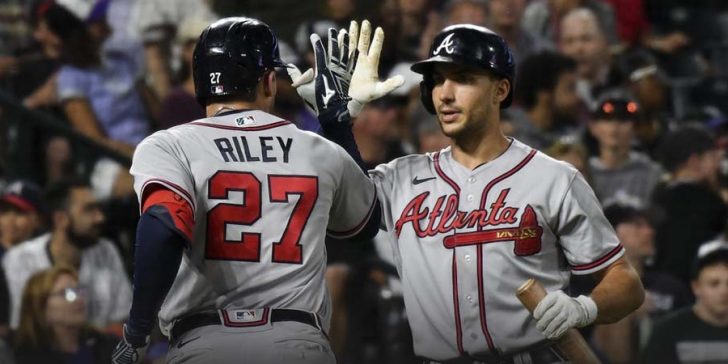 The Braves are 20-4 when they score at least five runs, which they have done in 4 of their last 5 games played.
In the month of May alone, the Braves are 9-2-1 in overs-unders-pushes, in games as the home favorite.

ATLANTA – The Braves are taking on the Athletics from Truist Park tonight, and the Braves have been successful hitting the over for scoring totals when playing at home this season. Oakland has not done a great job stopping their opponents from scoring this season.

Betting On The Over

Out of their 25 total games played so far, they are averaging 4.88 runs per game, when they are favored and are playing at home.

Whenever the Braves are favored by at least -160 odds, they have hit the over nine times, the under only twice, and the push once. There is also a pattern with the over leading to the Braves success. Out of those nine games where they hot the over as the favorite, eight of them resulted in victories.

The Athletics have not been playing their best baseball away from home, or even just throughout the season in general. In games that they are playing on the road as the underdog at +150 or more during the 2022 season, they are -1.9 units in the last 17 games.

Also in those last 17 games, they have averaged a score of 3.1 runs per game but have given up an average of 4.7 runs.

However, in the last five games, the Braves have put up 38 runs, resulting in an average of 7.6 goals per game, almost hitting the over all by themselves. With the Braves offense and batting presence being this efficient in recent games, the over could be hit by the Athletics scoring at least one run.

Betting On The Money Line

There are also legal sports betting opportunities in betting on the money line of the game.

The Athletics have been in a slump recently, losing their last six games. Oakland has a 13-12 record when playing away from home, which is better than their overall record, but odds for betting on baseball still say to bet against them for tonight.

Odds For The Game

On the other side, the Braves have been on an offensive roll recently, but have been exactly average from home, with a 14-14 record. However, they play their best when they record at least five runs in a single game.

When they succeed in this, they have gone 20-4 over the season, and they have scored at least six runs in six of their last eight games played.

As the heavy favorite, the money line can be an efficient way to wager, but betting on the over for the Braves has the most favorable odds, and has data from past games to back it up.