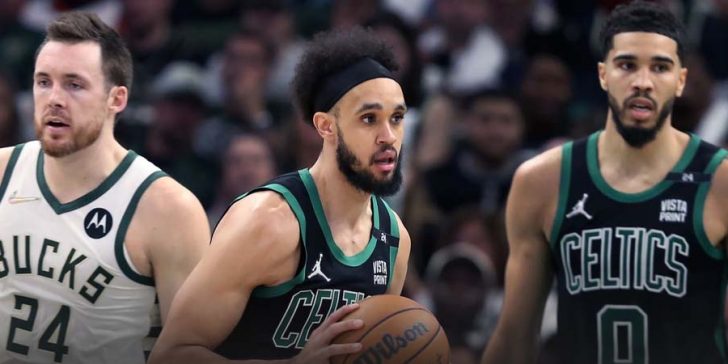 The Milwaukee Bucks have -120 odds to beat the Boston Celtics In Game 6.
The Bucks’ odds to win the series are -225.

MILWAUKEE – In what has been arguably the closest second-round series of the NBA Playoffs, the Milwaukee Bucks are favored to beat the Boston Celtics in Game 6 and close out the series on Friday night.

The NBA playoff odds  for this series as a whole have been extremely close as the spreads for each of the first five games have not gone over 5 points and both teams have been favored to win games as well. Also, the last three games of the series have been decided by 8 points or less.

Where The Public Stands

Surprisingly enough, despite the series being so close, the Bucks have been taking in some serious action on the Game 6 lines. They are taking in 71% of bets and the betting handle on their -125 moneyline odds.

On the spread, they are also taking in 71% of both the handle and total bets to cover -1.5-points. The Celtics have prevailed in underdog situations though having gone 3-0-1 against the spread in their last four playoff games as an underdog and 6-0-1 ATS in their last seven games as a road team underdog.

Where The Series Price Stands

Milwaukee is favored being that in a perfect situation, they would close out at home against Boston, but with no team winning two consecutive games in the series, a crucial Game 7 could be pushed back to Boston.

Looking back at the history of Game 7s, Milwaukee has done a horrendous 3-8 job in the last game of a series which is the eighth-worst Game 7 record in the league.

As for Boston, they thrive in Game 7 scenarios winning the most in league history at a 24-9 record .

Given that no team has won two straight games in the series, and Boston’s rich history in Game 7’s, now could be the time to get in on their rare plus odds to win Gams 6 and their +185 odds to win the series before they potentially shift.