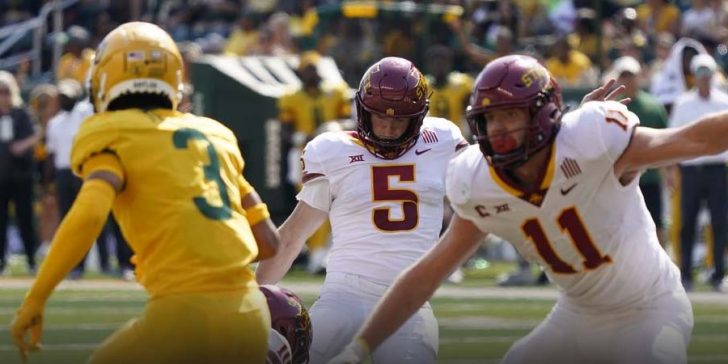 LAS VEGAS – There are some close matchups set for top-25 teams in Week 4 of the college football season and oddsmakers have doubts about these higher-ranked teams covering the spreads in their games.

However, public betting splits see action on them covering.

In the Big 12, Baylor is traveling to Ames, Iowa to take on the Iowa State Cyclones where they are a road team underdog even as a top-25 ranked team against an unranked, but undefeated Cyclones team. Despite being an underdog on the road, the Bears are still seeing some solid action on their CFB odds at 62% of bets placed and 56% of the handle to cover +2.5 points.

The public that is leaning on Baylor should feel extremely comfortable though as Baylor has risen to the occasion against the spread when facing Iowa State as an underdog. In fact, they’ve been listed as an underdog in their last four meetings dating back to 2018 and have gone 4-0 ATS. That includes a +2.5 outing in 2019 where they won the game.

In this ACC matchup between Clemson and Wake Forest, Clemson will look to back the way the public is betting on the spread as they’re taking in 79% of total bets placed and 75% of all money being bet on them to cover. The heavy action altered the way legal betting sites set these odds after it opened at a 7-point spread and shifted to where it’s at now.

In recent years, Clemson has found major success against Wake Forest having beaten them in 10 straight games since 2012 and have covered a 7-point spread on them in each game. As for the spreads set by the books, Clemson is 3-1 ATS vs. Wake Forest in their last four meetings.

Yes, Oregon is going into this game as the favorite but it is Washington State that has the shading on their +7 spread. The way the public is betting though backs up Oregon to not only win the game, but cover as well. They are looking at 81% of total spread bets placed and 67% of the money being laid as well.

Historically, Oregon has not don’t well against the spread when facing Washington State going 2-8 in their last ten matchups, however, those two ATS wins have come in the last two seasons. In the last two meetings, Oregon has asserted their dominance having won both games by 10+ points.