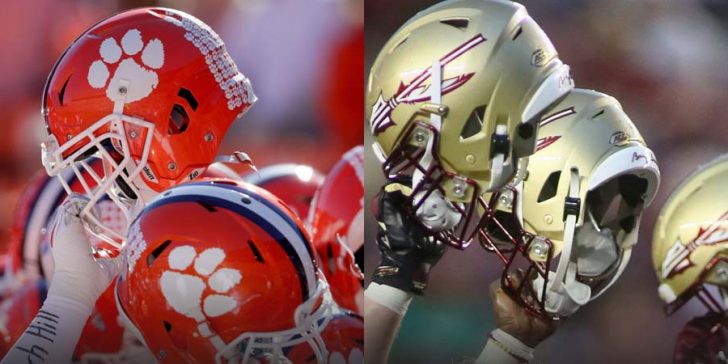 TALLAHASSEE, Fla. – Things are beginning to heat up in the college football world as each Power Five Conference has been looking for ways to expand meaning different teams switching conferences. Most recently reports have surfaced of major ACC programs exploring a switch to the SEC.

Some of the schools that were mentioned include the Clemson Tigers, Florida State Seminoles, and Miami Hurricanes. All of who are amongst the favorites to be the next team to accept an invite to the SEC.

Next School To Accept Invite To The SEC

If the approvals go through for any of these teams to switch to the SEC, it would not be the first as the SEC has already added Oklahoma and Texas from the Big 12.

Something else that has pushed the SEC to pursue these three schools were the additions that the Big 10 made in UCLA and USC in recent weeks. Because the revenue of each conference is such as competitive market, the fact that the Big 10 has expanded to the California market would push them far ahead of the SEC.

Why Clemson, FSU, And Miami?

The SEC did not just explore options for any team, they carefully chose these three schools as they each meet the criteria for an SEC team in different ways. Clemson’s football team is already run like an SEC team being that they have been ranked number one in the nation at some point in the season in six of the last seven seasons. They’ve also been to nine New Years Six Bowl games.

As for Florida State, they are one of the most storied athletic programs in the history of college sports. They’ve won three college football National Championships and their basketball program has been one of the best in the country in recent years. Yes, the football aspect plays a role in their addition, but with the SEC lacking in basketball talent, this is a huge addition.

Looking at Miami, they would be added to the SEC for the same reason that UCLA and USC were, to expand to one of the biggest sports markets in the country, South Florida which is also a feeding ground for athletic talent.

If they do add both Florida State and Miami, the SEC would completely own the Florida market being that the University of Florida is already in the conference.

How To Get The Most Value Betting On These Odds

With each of these three teams being strongly pursued by the SEC, there is a way to make a profit when sports betting on all three of them. Starting with $400, the bet would be split up as follows:

If either Clemson or FSU’s odds hit, it would profit $375. However, after recuperating from the $250 lost on Miami and either Clemson or FSU, it would leave a profit of $125. If it were Miami’s odds to hit, after making up for the $300 lost, a $25 profit could be made. There is one more possibility of more than one of these teams accepting invitations at the same time.