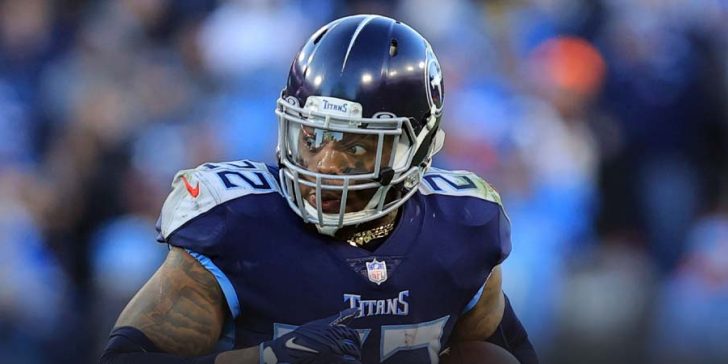 NASHVILLE, Tenn. – Derrick Henry and the Tennessee Titans are headed into Monday Night Football in Week 2 tied as the second largest underdogs of the week at +10 points on the spread to the Buffalo Bills. This comes as no surprise as the Bills manhandled the Los Angeles Rams in Week 1 holding the team to just 243 yards.

While this is a tough matchup for Tennessee, that doesn’t mean that legal online betting sites don’t have player props available for Derrick Henry’s total yards in the game as well as his odds to score a touchdown.

Will The King Be Contained?

This could arguably be Henry’s toughest matchup of the entire season, however, the Titans offense is set up to run through him as he had the sixth most rushing attempts last week at 21. Something else that backs the over is that Tennessee’s featured pass-catching back, Dontrell Hilliard, will miss this game with a hamstring injury.

If Henry were to break loose to hit the over, the Titans gameplan could look to run him to the left hash as Darrell Henderson’s longest runs of Week 1 came to the left side for 10 and 19 yards. Henry’s longest runs also came when lining up to the left of the QB in Week 1.

Will Derrick Henry Score A Touchdown?

Even though the Bills run defense showed their strength in Week 1, NFL odds are still heavily in favor of Henry finding the endzone in Week 2. His -150 odds to score are the shortest of any other player in the game as well.

Something to keep an eye on though is that Buffalo’s defense did not allow many redzone appearances in Week 1 with Henderson getting just two carries inside of the 20 yard line. That being said, unless Henry breaks free for a big touchdown run, the Titans could be dormant in the redzo