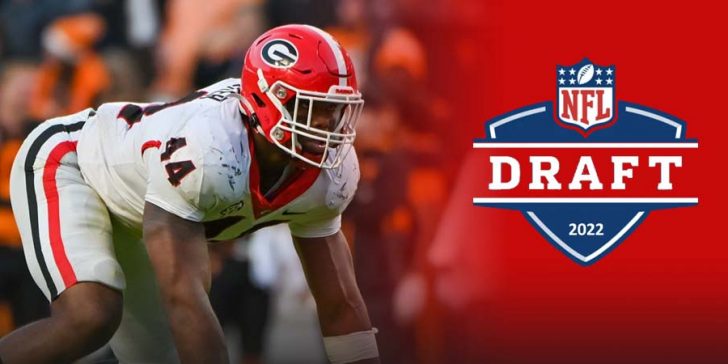 The Atlanta Falcon’s betting odds rightfully favor them selecting a receiver.
Despite his polarizing status, Jordan Davis may be the most likely selection by the Baltimore Ravens
Cornerback is the position with the shortest odds for the Buffalo Bills to select, but wide receiver makes more sense.

LAS VEGAS – The first round of the 2022 NFL Draft begins tomorrow and the Atlanta Falcons pick eight, the Baltimore Ravens pick 14th, and the Buffalo Bills pick 25th.

Who each team selects is up in the air, but oddsmakers have a pretty good idea of what position each team may be targeting.

Atlanta Falcons With A Clear Need At Receiver

Legal online sportsbooks are spot on to suggest that the Atlanta Falcons are likely to select a receiver with their first-round selection.

A look at the Falcon’s depth chart may even make it surprising that the receiver isn’t an even larger favorite for their first pick.

Calvin Ridley has been suspended for the entire 2022 season, and there were talks that he was going to demand a trade regardless, so he does not factor into this.

Based on career achievements it seems that Damiere Byrd will be the number one wide receiver for the Atlanta Falcons.

With wide receiver established as a clear need, and recent history showing a willingness to invest in the position (they have selected four wide receivers in the first round since 2000), the focus is on which wide receiver makes the most sense for them.

Based on measurables and rankings it seems that Garrett Wilson is the likely choice for the Falcons, especially when comparing him to their previous number one wide receiver Calvin Ridley.

Ridley was the last wide receiver picked in the first round by the Falcons back in 2018, and was considered by many to be the top wide receiver prospect in his draft, although he ended up as the second wide receiver selected.

Wilson is also rated as the sixth-best prospect in the entire draft, but with draft odds listing his draft position over-under at 9.5, it is likely that he will be available.

The Atlanta Falcons and Garrett Wilson seem like a perfect match when they pick on Thursday night, so with his individual odds to be selected by the Falcons at +250 NFL bettors may actually be getting a bargain.

Odds Pointing To The Ravens Building Through The Trenches

The Baltimore Ravens have long been known for their vaunted defense that was built on pressuring opposing quarterbacks.

Last season the Baltimore Ravens tied for 21st most pressures in the entire NFL, despite blitzing at the sixth-highest rate in the league. Only one team (the San Francisco 49ers) had less pressure than the Ravens and still made the playoffs.

Now Baltimore did attempt to address this issue when they picked Odafe Oweh with the 31st pick in last year’s draft, but the odds clearly indicate that they need more.

Jermaine Johnson, a stud defensive end from Florida State, is currently ranked as the 14th best prospect in the draft by ESPN. However, his odds indicate that he will likely be a top-ten pick.

The next highest-ranked defensive end is Arnold Ebiketie, but he is the 34th-ranked prospect and would likely be too large of a reach.

One polarizing option for the Ravens may be to select Georgia defensive tackle Jordan Davis.

Davis had an incredible season at Georgia and dominated the NFL Combine (He ran a ridiculous 4.78 40-yard dash at 6’6″ 341 lbs!), but some question his pass-rush ability.

Jordan Davis accumulated seven sacks in his four seasons at UGA, but with his size/strength combination his impact is more about commanding double and triple teams by the opposing offensive lines and freeing up space for his teammates to get after the quarterback.

If the Ravens opt to try and improve their pass rush and add a possible goal-line running back (Davis two rushing attempts and one touchdown), Jordan Davis is the most likely selection.

Betting odds suggest they may focus on either a corner or running back, but the selection that might make the most sense is a receiver.

The Bills just signed Stefon Diggs to a contract extension that marries the two of them together until 2027, but with wide receiver contracts booming it may still be worth securing a good second option via the draft so that they have a cost-controlled receiver on their roster for the foreseeable future.

Supporting the idea that the Bills may draft a receiver is that the 24th (Treylon Burks) and 25th (Jahan Dotson) highest-rated players are also receivers.

If the Bills follow the best player available strategy and follow their big board, a wide receiver at +500 odds for them may prove to be one of the best bets in the NFL Draft.