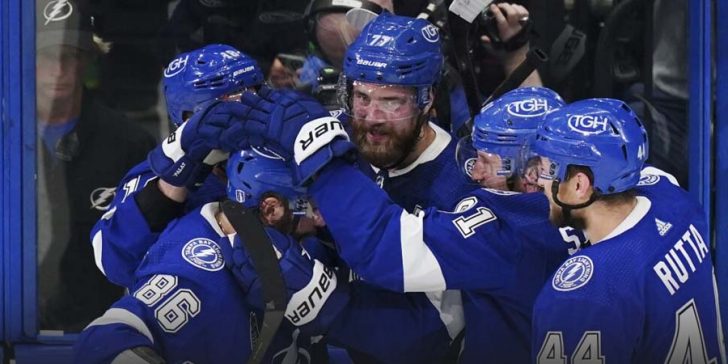 Andrei Vasilevskiy has +110 odds to record 37+ saves in game five of the Stanley Cup Final.
Steven Stamkos and Nathan MacKinnon have +450 odds for them both to score in Game 5.
The Lightning were up 1-0 after the first period in Game 4, and have +500 odds to do that again.

DENVER – Even though this could be the last game of the Stanley Cup Finals, there are many prop bets on the Lightning that hold value.

With a .920% save percentage for the 2022 playoffs, Andrei Vasilevskiy has stopped 630 total shot attempts. Over the 21 games the Lightning have ensured these playoffs, that is an average of 30 saves per game.

When facing elimination, Vasy plays lights out. When the Lightning closed out the Panthers by completing a sweep in the second round of the playoffs, the Big Cat recorded a shutout, on 49 shot attempts.

Betting On The Big Scorers

For the Lightning, Steven Stamkos has 10 goals over the playoffs, and Kucherov has recorded seven of his own. Over in Colorado, Nathan MacKinnon leads the scoring with 12 total goals over the course of the 2022 playoffs.

A combination of these scorers striking in the same game has not yet happened in this series. This could leave one to reason that each team’s leading scorers are bound to both score on the same night and Bovada has odds for that potential outcome.

Odds to Each Score 1+ Goals

In this series, these star goal scorers have been quiet, with a combination of only two goals. Kucherov is the only player yet to score, but has scored goals in all three previous series in 2022.

In Game 4 of the Stanley Cup Finals, the Lightning ended the first period with a 1-0 lead over the Avs. Legal sportsbooks have Tampa Bay with +500 odds to do that again in Game 5.

The Avs shut out the Lightning in Game 2 but Brayden Point is once again not playing.

There have been minor injuries to Nakita Kucherov, Nick Paul, Anthony Cirelli. Even though these three players will be on the ice, the Lightning seem to be at a scoring disadvantage and only had three days of rest in between series, compared to Colorado’s seven.

At the same time, the Avs went five straight periods without scoring on five-on-five hockey, and bettors have seen that Vasy has the ability to shut a team out, when their back is against the wall.

Odds For Both Teams To Score During Regulation

Betting on one of the two teams to not score during regulation may seem risky, but we have seen both teams pull of shutouts in these playoffs.