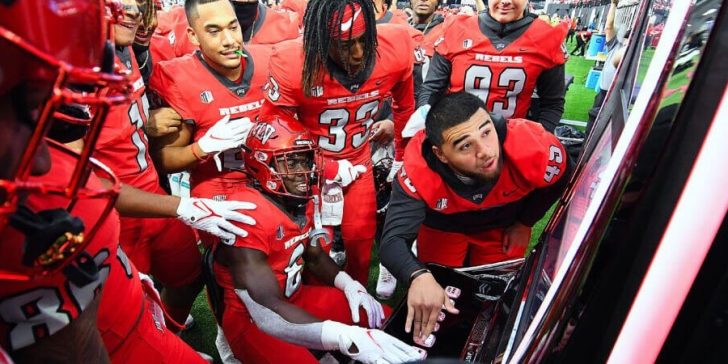 UNLV Football introduced their slot machine in the middle of last season.
The slot machine received positive and negative notes from social media.

LAS VEGAS – No other town represents gambling quite like Las Vegas, evident by the slot machine for the UNLV Runnin Rebels’ football team. UNLV debuted the “momentum play” machine last season but a first-quarter interception from Austin Ajiake helped make the slot make headlines in 2022.

UNLV is not known for their football team but covering a 22-point spread by over a touchdown is a sure way to get noticed.

The idea came from head coach Marcus Arroyo who spoke with Shelby McIntyre – UNLV’s direction of recruiting – about it last season. McIntyre then called former UNLV player Joe Haro, a board member for the UNLV Football Foundation, who made the IGT connection.

Since McIntyre “wanted the slot machine to win every spin” thinking “this will go viral” IGT’s mathematicians programmed an algorithm to make this happen.

The Connection to College Football

Though the slot machine was well revered by college football betting fans, some were on the opposite side of the fence.

With the NIL deals making college football commercialized, many are quick to forget the majority of CFB players are under 21. Senior Austin Ajiake is above the Nevada gambling age – and no money was being risked – but the allure from underage CFB fans is still an issue.

Could the NCAA ban the UNLV football slot machine?

NCAA Bylaw 10.3 does limit “sports wagering activities”, a liberal approach nonetheless. Still, without real money action, nor this being a legal sports betting issue, it will likely not see attention from the NCAA.

But, it IS the NCAA. Earlier this year, they banned “Hammerin’ Hokies” – Virginia Tech’s baseball trademark sledgehammer swing. On the grounds that the tradition “distracted, intimidated, or disconcerted the opposing team“, the NCAA didn’t back down from its stance.

In reality, the UNLV slot machine is a representation of college sports betting in the US. It is something that happens nationwide, but once it hits the headlines, many are quick to flip sides and keep it in the dark. Over 30 states have sportsbook regulations but many ban certain college sports bets.

Still, this slot machine should be a fun, team-bonding experience rather than a deep dive into the focus of athletes and sports betting.