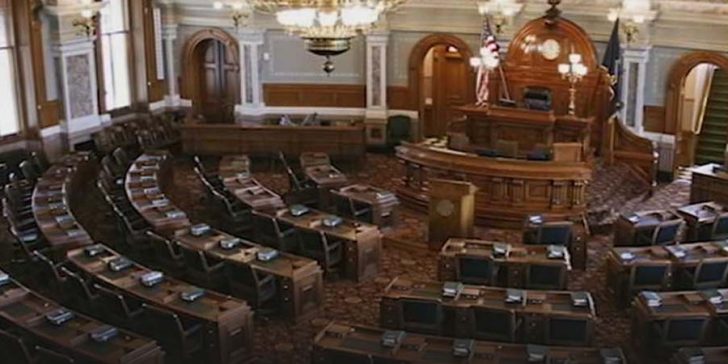 HB 2740, a Kansas sports betting bill, stalled in the House Committee on Federal and State Affairs Tuesday after the committee approved several amendments.
The bill was then voted in favor on Wednesday and now moves to the Senate.

TOPEKA, Kan. – On Tuesday, the Kansas House of Representatives came very close to finally voting on HB 2740 – a bill that would legalize and regulate sports betting in Kansas – before the House Committee on Federal and State Affairs adjourned without a vote.

HB 2740 was the sole item on the agenda. While the non-vote lead to some doubts on the bill passing, committee members were able to come to a consensus and voted to pass the amendments 85-32. The bill now moves to the Senate Floor.

Sit tight, guys, we’ll get this out this year. Communication and teamwork are key, and sometimes communications break down. We can fix this; I’m sure of it. #ksleg

Throughout Tuesday’s session, lawmakers proposed and debated a variety of amendments, both small and large.

The second amendment was also proposed by Barker and concerned marketing agreements between lottery gaming facility managers and non-profit and fraternal organizations.

Under the amendment, a minimum of 20% of these agreements must be with non-profit or fraternal organizations. The amendment passed.

The third amendment – again introduced by Barker – was much more consequential and controversial.

This amendment would have removed language from the bill that allows for online lottery ticket sales. This amendment was lively debated, with legislators eventually voting down the amendment for its perceived negative fiscal impact.

Lawmakers pointed out that the Barker III Amendment could have cost Kansas up to $11 million per year, which is about $1 million more than the legislature’s high-end estimates of yearly revenue from sportsbooks in Kansas.

On behalf of the NFL, the Hoye Amendment would prevent sportsbooks from offering betting odds on injuries, penalties, outcomes of disciplinary hearings, or replay reviews.

These restrictions would only concern events whose sanctioned league’s headquarters is located in the United States, such as the NFL, MLB, NBA, MLS, and NHL, but not internationally-based leagues, such as the EPL. This amendment passed, albeit in a divided vote.

Under the original HB 2740, Kansas’ four casinos would be granted the ability to partner with up to three online sportsbook operators. Kansas’ six tribal-run casinos would also be given the opportunity to amend their compacts to allow for legal sports betting.

“If casinos contract out, we get a small percentage of the money. If we let the Kansas Lottery contract it out, we get all of it,” said Awerkamp at the hearing.

The amendment was thoroughly debated but eventually failed to pass.

The Kansas legislature is facing an upcoming May 20 deadline to either pass the sports betting bill or start from scratch in the next legislative session.