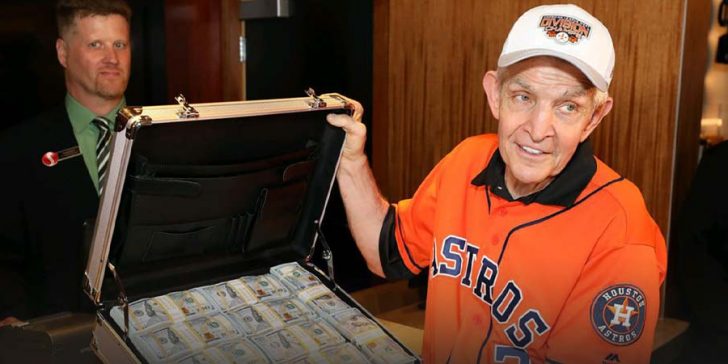 Betting a total of over $6 million across three different sportsbooks, Mattress Mack could break the record for the largest payout in sportsbooks history with the Astros winning the 2022 World Series.
Mack has placed many future wagers on the Astros in past seasons, but this wager is months before the playoffs, giving him +533 odds at Barstool, +1000 odds at Caesars, and +1200 odds at WynnBET.

HOUSTON – Jim Mclngvale, also known as Mattress Mack, has placed another massive future bet on the Houston Astros. But this one would result in the biggest payout in legal sports betting history.

He placed $2 million on the Astros to win the World Series, at +533 odds, and would receive $10 million if the bet hits with Barstool Sportsbook.

Mclngvale did not stop with Barstool, placing two more bets over a million dollars with WynnBET, who had +1200 odds and Caesars, who had +1000 odds, totaling over $6 million wagered on the Astros for the 2022 World Series.

These other two bets were placed in May, when the Astros were not as heavy as a favorite, and the experienced sports bettor was able to find the books with the longest odds. With all of these bets needing the Astros to win it all, Mattress Mack would pocket over $50 million in payouts from these legal sportsbooks.

The 2022 MLB regular season does not end until October 5, making this series of bets one of his more pre-mediated future wagers. However, the Astros do have the third-best odds to win it all, and this would be the Astros first time cashing out Mclngvale’s World Series Wagers since the 2017 World Series.

In a tweet, Mclngvale thanked the Barstool Sportsbook in Louisiana for accepting the massive wager, promoting his usual mattress sale that goes along as a type of insurance.

These potential record-breaking wagers came only a week after he spoke at the annual sports betting conference in New Jersey, where he explained his desire for sportsbooks to accept larger wagers, and hope for the bettors to win big.

The famous sports bettor has placed similar wagers like this before and has placed future wagers on Houston to win the World Series consistently since 2019. When the Astros defeated the Yankees in 2019 and headed to the World Series, Mack placed a total of $13 million across three states, but only required them to win one more series for the bet to cash.