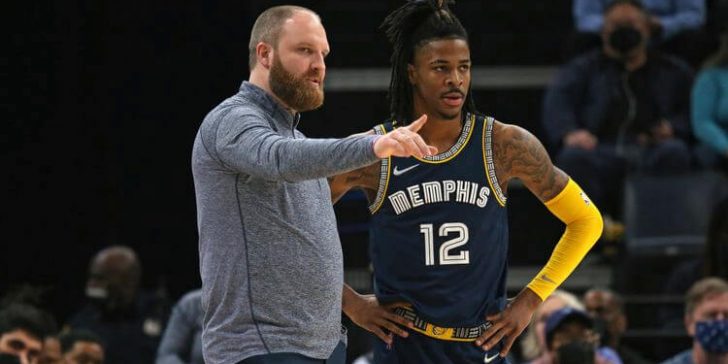 If you’re a Memphis Grizzlies fan, you’re likely thrilled with the long-term potential of the franchise. Ja Morant is a 22-year-old star, quickly having become one of the league’s best guards since entering the league in 2019. The team’s top five scorers are all 26 or younger, as the Grizzlies average the second-youngest age of any team in the NBA.

Not only are the players young, but head coach Taylor Jenkins, at 37, has quickly become a rising star in the profession. Given Memphis’ current standing — the Grizzlies are third in the Western Conference — Jenkins is in the mix for Coach of the Year honors.

Coach of the Year candidates

While Jenkins is in the running for Coach of the Year, he’s not the current betting favorite. Monty Williams, of the Western Conference-leading Phoenix Suns, is the leader, with BetMGM offering Williams at -150 odds.

Jenkins checks in at +700, matching the odds of Bulls coach Billy Donovan. Aside from Williams, Cleveland Cavaliers coach JB Bickerstaff (+350) is the only peer with better odds than Jenkins to win the award.

My mythical midseason Coach of the Year ballot:

While Williams is the clear favorite, there’s a case to be made that placing a bet on Jenkins holds value. According to Tankathon, the Grizzlies have the easiest remaining strength of schedule in the NBA. If Memphis goes on an impressive run toward the end of the season, Jenkins could vault up the COTY odds. Donovan and the Bulls have the fifth-toughest remaining schedule. On the flip side, the Suns and Cavs play two of the 10 easiest schedules in the NBA the rest of the season, which could make it challenging for Jenkins to catch Williams or Bickerstaff.

Memphis, which has won its last two games and five of its last six, welcomes the Los Angeles Clippers to town Tuesday night after a three-game road trip. The Grizzlies are significant favorites in the matchup, with BetMGM listing Jenkins’ team as a 7.5-point favorite. DraftKings, FanDuel, TwinSpires, and WynnBET give the Grizzlies an 8.5-point edge.

The Grizzlies are 2-0 against the Clippers this season, winning 120-114 and 120-108 in a pair of road wins. The total for the matchup is 228.5 at most major Tennessee sportsbooks, and DraftKings lists Memphis’ team total at 118.5. Morant’s individual point total prop on DraftKings is set at 27.5 points, after he scored 28 in the teams’ first meeting and was inactive in their rematch.

The Memphis moneyline ranges from -300 on BetMGM to -375 at TwinSpires. Oddsmakers like the Grizzlies to walk away with the victory, and if you’re betting Taylor Jenkins to be the NBA’s Coach of the Year, you’ll be rooting for the Grizzlies to finish the year on a hot streak.