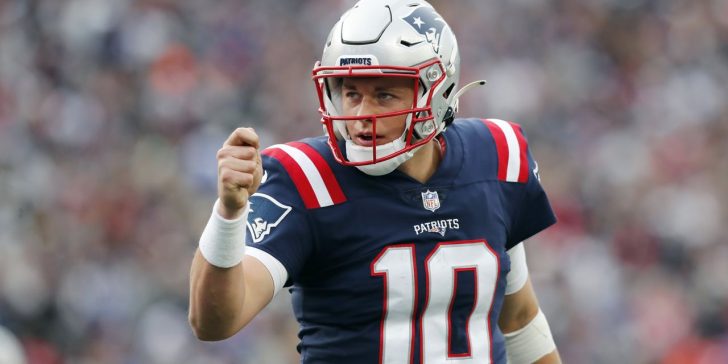 After taking a one week hiatus to regroup and enjoy Thanksgiving (even content producers need bye weeks), we are back with a primetime double-dip. First place is on the line in both AFC East and West.  In addition to the line moves we set the table with NFL Week 14 look ahead lines from FanDuel Sportsbook.

The Broncos ride into Kansas City for Sunday Night Football with a chance to grab a piece of the AFC West lead. Kansas City enters off of a bye and looks relatively healthy with Kyle Long added to the 53 man roster. Kansas City opened 9.5 point favorites reaching as high as 10.5 at prominent books Monday before we saw professionals enter the market on Denver.  10 is the consensus number at publication and I believe this number trends below the key number.

Denver should get back both starting tackles this week. Bobby Massie is scheduled to return from an ankle injury and Garett Bolles was removed from the Covid-19 list Thursday.  For a run heavy offense featuring two physical backs, that’s a massive boost.  Denver is 11th in PFF’s run blocking grades and 14th in adjusted line yards. If there’s a strength of the Broncos offense it’s pounding the rock.

While we’ve led the movement at Bet the Board that Kansas City’s defense would turn it around and isn’t “the worst defense ever”, we still have to recognize they’re subpar stopping opposing rush attacks. Spags’ group ranks 25th in defensive rush success rate and 31st in Run Stop Win Rate although trending much better. I expect to see game scripts we’ve seen in the past from Fangio against the Chiefs. Focus on a strong ground game and take time off of the clock.  Denver takes great care of the ball as well.

D is for Defensive Back

Denver is one of a few teams that MIGHT have defensive personnel in the secondary to match Kansas City’s offense.  It looks like safety Kareem Jackson will return, solidifying a strong unit alongside Justin Simmons and rookie Caden Sterns.  Denver is also trending the right way along the defensive line. Bradley Chubb, Shelby Harris and Mike Purcell are all good to go.  The Broncos stop unit looked sharp coming off their bye and it should continue here.

Vic Fangio is known for complicated schemes. It may have taken a bye week to finally get this secondary playing to their capabilities.  This will be Denver’s biggest test of the year although we did see them dominate Dallas on the road already this season.  Kansas City is extremely talented and poised for another Super Bowl run but at +10.5/10, the Broncos were a “buy” for professional bettors.  Expect this number to fall further before kick and settle closer to 8.5. Keep in mind, the public has their say in stand alone games which makes monitoring this line movement even more fascinating.

Monday Night Football should be a doozy. New England travels to Buffalo in a battle for AFC East supremacy. Buffalo was installed as a 3.5 point favorite on the look ahead line and we saw hooks immediately evaporate from the market. More Patriots money showed up Tuesday morning at +3 driving the price under a field goal.

Buffalo won in New Orleans on Thanksgiving but lost their best defensive player CB Tre’davious White in the process.  While the loss is significant, I’m not sure we’re going to feel the full extent of his absence on the Bills’ defense in this particular match-up.  Buffalo received good news this week as DT Star Lotulelei comes off the Covid list making him eligible for Monday night. He’s a huge help for this rush defense that sorely missed him and Tremaine Edmunds against the Colts.

The Bills have faced an incredibly EASY schedule of offenses. They rank 2nd in defensive rush success rate and 3rd in adjusted line yards. Overall they’ve done a good job stuffing runs as you’d expect against their schedule.  New England has faced the 25th schedule of opposing defenses making Monday a major step up in class.  With poor weather on the horizon, Buffalo may potentially stack the box forcing Mac Jones to throw into the teeth of the best secondary and scheme he’s faced during his short NFL tenure.

Help is on the Way

On the other side of the ball, we know Buffalo has the ability to score.  They will have reinforcements on the offensive line with Jon Feliciano and Spencer Brown back in the fold this week.  Both players missed the Jaguars and Colts games, and it was very evident how much they were missed in pass protection.  New England’s defense is getting a ton of love right now, and for the most part it’s well deserved.  However we have to look at the schedule and see who’ve they have played.

New England has faced the 30th schedule of opposing offenses this season. They’ve faced two elite groups so far this season. One game was played in the pouring rain against Tampa Bay while the other was against a Dallas team that went up and down the field. With their leading tackler S Kyle Duggar on the Covid list and likely out for this game, the challenge gets tougher for Bill Belichick and company.  Bottom line, this price feels like the absolute peak price for the Patriots. I’m not sure they’ve been challenged to this point to warrant this level of respect.  At -2.5 I expect Buffalo to take money before kickoff and we should see this close -3.