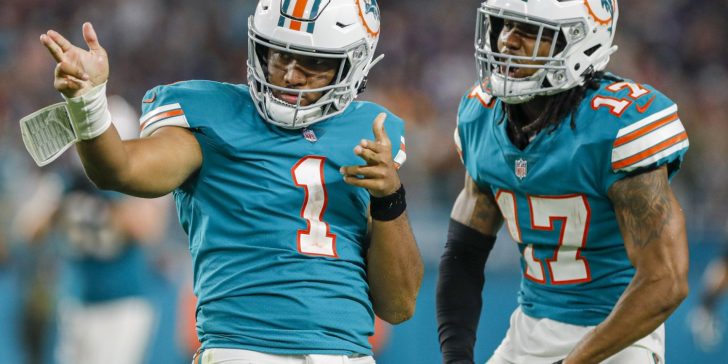 This Week 3 Point Spread Will be on the Move

NFL Week 3 appears to be overreaction week with one glance at the board. My main focus is on two teams residing in the AFC East garnering public attention after 2-0 starts. Buffalo travels 1400 miles south to Miami on a short week after dismantling Tennessee Monday night. The Bills and Dolphins have provided fireworks in recent meetings but our advantage lies elsewhere.

The Game of the Year market isn’t overly liquid but we can glean information from it. The Buffalo Bills were 3.5-point road favorites. After the Bills thrashed the Rams opening night and Mike McDaniel outwitted Belichick the Week 3 look ahead line was Buffalo -4.5. As of Thursday, the Bills are 6 point favorites with multiple shops dealing 6.5.

Buffalo looks every part of a Super Bowl favorite crushing the Rams and Titans and covering both by a combined 44 points. The Bills rank 1st in defensive efficiency, adjusted line yards, and adjusted sack rate. Offensively, Buffalo is 1st in EPA per dropback.

There are very few negative things you can say about the Buffalo Bills. However, this is a market and the Bills are priced too high when factoring all elements.  The Rams and Titans have underperformed preseason expectation and do not possess the intangibles at the skill positions Buffalo will see Sunday.

The Bills are still without star corner Tre’Davious White as he recovers from an ACL injury. Dane Jackson and Micah Hyde did not leave the field under their own power Monday night. Jordan Poyer popped up on the injury report Thursday missing practice with a foot injury. Starting defensive tackle Jordan Phillips has not practiced yet this week. All signs point to rookie corners Christian Benford and Kaiir Elam starting against Tyreek Hill and Jaylen Waddle.

Miami Dolphins are Learning on the Fly

Miami is unblemished but there is room for improvement for coach Mike McDaniel’s bunch. The Dolphins secondary awaits the return of Byron Jones but in his absence has played poorly. Miami is 26th in EPA per pass allowed and 29th in passing success rate allowed. Xavien Howard hasn’t played close to his contract and popped up on the injury report with a mild groin injury Wednesday.

This matchup however is more about the offensive side of the ball for Miami. Tua looks confident in this new look Dolphins offense. He went through his progressions well against the Ravens allowing his playmakers to shine with the ball in their hands. Mike McDaniel is in his bag with rarely seen formations while incorporating high rates of motion and play action. The Dolphins faced two notoriously stingy defenses led by Bill Belichick and John Harbaugh and Miami came out the other side 2nd in offensive efficiency.

The final piece to the puzzle is how we arrive at this price. The Buffalo Bills closed soft 10 against the Titans for Monday Night Football. Now the Bills battle multiple injuries in their secondary and along the interior of the defensive line. Buffalo loses two days of prep after their Monday game and travel day. The current weather forecast is 87 degrees with 84% humidity at kickoff.

Let’s give Miami 1.5 points for home field advantage in this unique situation. That would make the Bills -7.5 on a neutral field. If we conservatively give the Bills 2.5 points for home field advantage that would leave us with a spread of Buffalo -10. Comparatively that would be a stronger price than what Buffalo closed against Tennessee days ago. In the words of Kevin McCallister; “I Don’t Think So!”