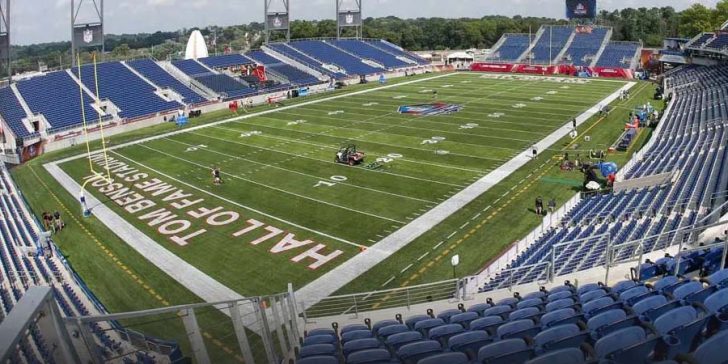 The Las Vegas Raiders have -120 odds to beat the Jacksonville Jaguars.
There is a 1.5-point spread on the game.
The Raiders are undefeated in Hall of Fame Games.

CANTON, Ohio – The 2022 Hall of Fame NFL Preseason game is set between the Las Vegas Raiders and Jacksonville Jaguars where Vegas is being seen as the slight favorites on the game line.
The Hall of Fame Game is set to kick off the preseason on August 4 from Tom Benson Hal of Fame Stadium in Canton, Ohio.

Trends Leaning Towards The Raiders

The Raiders are going into this game in a great spot being that their depth behind their starters is much stronger than the rebuilding Jaguars. With the preseason generally being played more by the backups on the teams, it puts the Raiders far ahead with Nick Mullens as their QB who was a starter just two seasons ago.

In 14 of the last 15 Hall of Fame Games, the spread has closed at three or less points. The favorites have also held the last 15 games as well going 7-5-3 against the spread.

On the Jacksonville side, they’ve played in one Hall of Fame Game prior to this one in 1995 where they lost to the Carolina Panthers 20-14.

One of the most popular bets to make in the Hall of Fame Game and preseason overall is on the Over/Under. Both the Over and Under from sportsbooks have been fairly even in the last 15 games going 8-7 with the slight advantage towards the Over.

However, it is the Under that has been streaking over the last nine games having gone 7-2 and hitting in the last three games.