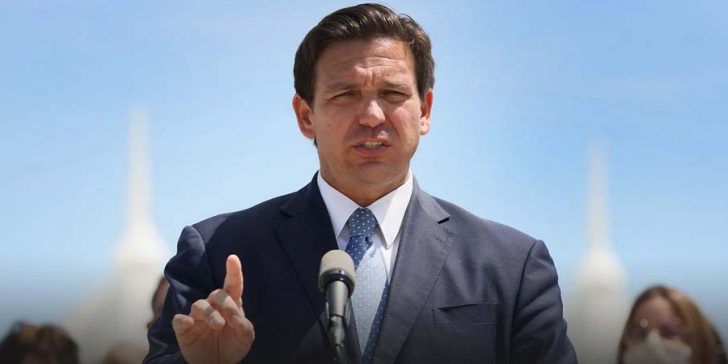 Popular podcaster Joe Rogan and Billionaire Elon Musk have both publicly endorsed Florida Governor Ron DeSantis to win the 2024 Presidential Election.
DeSantis now has +325 odds to win the upcoming election, tied for the shortest odds alongside former President Donald Trump.
DeSantis has not announced a bid for the presidency as of yet.

WASHINGTON – While the 2024 Presidential Election is years away, many notable figures have embraced the thought of Florida Governor Ron DeSantis as the next US president.

Both billionaire Elon Musk and popular podcaster Joe Rogan have stated that Gov. DeSantis is their pick for the next president.

With sitting President Joe Biden’s approval ratings down, sportsbooks are predicting DeSantis as having a great shot at winning should he run in 2024.

Sportsbooks with election odds have DeSantis tied with former President Donald Trump as the two favorites to win the election.

DeSantis’ odds shortened drastically following the recent Joe Rogan endorsement. He now also has the second shortest odds to be the Republican candidate behind only Donald Trump.

The Republican Party is also favored at -135 odds to be the winning party compared to the Democratic Party having +115 odds at legal sportsbooks. This is also directly translated to the gap in odds between Gov. DeSantis and President Biden or 2024.

Why DeSantis Gets Support

DeSantis’ popularity grew during the 2020 COVID-19 pandemic when he elected to not follow states like New York and enforce stricter protocols and mask mandates.

While this initially resulted in a high rise in COVID cases in Florida, the Sunshine State’s local economy benefited compared to lockdown states.

DeSantis has also been vocally critical of President Biden throughout his presidency. Republicans have flocked to DeSantis due to his strong stance against several Democratic agendas being pushed by the Biden Administration.

DeSantis called out Biden for his stances on mask mandates and mandatory vaccines. The Florida Governor also signed into law a bill that stopped businesses, schools, and government buildings from requiring proof of vaccination, a stark contrast to Biden’s agenda.

DeSantis also gained a lot of support from Republicans for his stance against Walt Disney, moving to remove special privileges in Florida from the entertainment giant.

With his recent moves and public support gained from fellow Republicans as well as public figures like Rogan and Musk, DeSantis being favored is no surprise.