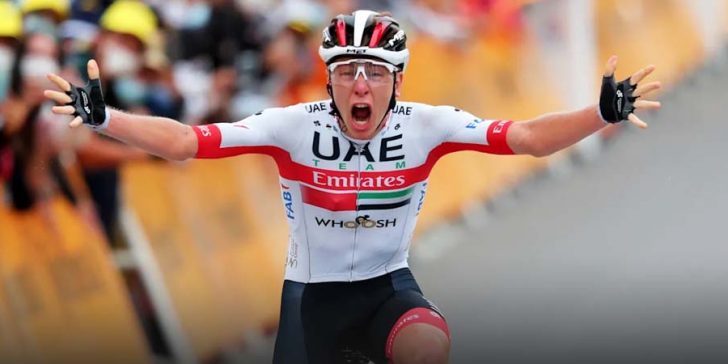 Tadej Pogacar’s -145 odds to win the Tour de France indicate he has a great chance to win his third straight La Grande Boucle.
Jonas Vinegegaard(+400) and Primoz Vingegaard(+400) are the only other cyclists with odds shorter than 10-1, but their team alegiances make betting on them a risky proposition.

COPENHAGEN, Denmark – Tadej Pogacar begins his quest for his third straight win at the Tour de France at the Grand Départ stage on Friday. Online sportsbooks have listed Pogacar as an outright favorite with -145 odds to win the La Grande Boucle and complete the first three-peat since Christopher Froome did so in 2017.

With Pogacar now an outright favorite for online sportsbooks, it is not surprising that only two other cyclists have odds shorter than +1000. Those cyclists are Jonas Vingegaard and Primoz Roglic who both have +400 odds to win the event.

One key issue with betting on either Vingegaard or Roglic is that they both represent Team Jumbo-Visma. Jumbo-Visma currently ranks first in the UCI World Team Rankings. With their team doing so well, it may be hard to predict their overall strategy heading into the race.

Of the five cyclists with the five shortest odds to win the Tour de France, Pogacar is the only clear leader of his team.

The clear team hierarchy and history at the event have made Tadej Pogacar the favorite and best choice when betting on the 109th edition of the Tour de France.