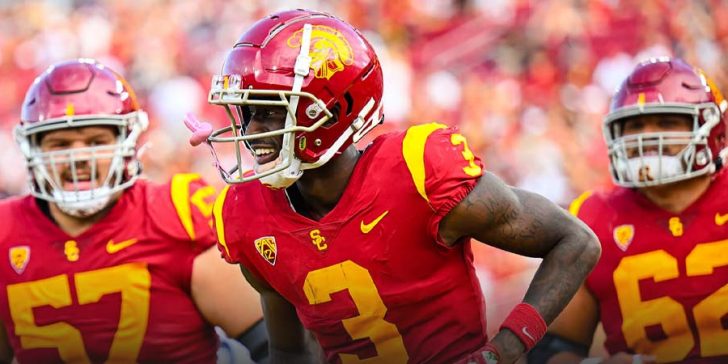 The Bulldogs, Crimson Tide, and Buckeyes are the top three teams in the nation and are all outright favorites to make the 2022 CFP.
The USC Trojan have the fifth-best odds to make the CFP at +250 and their regular season schedule gives them the best chance to become the next outright favorite.
In his second year as a starting QB, Caleb Williams has thrown 874 yards and eight TDs and has led the Trojans to have +1200 odds to win the CFP.

LOS ANGELES – Entering the fourth week of the 2022 college football season, the USC Trojans could be the next team to become an outright favorite to make the 2022-23 CFP and currently have +250 odds.

The Trojans currently have the fifth-best odds to win the National Championship at +1200 but are a decent underdog compared to the top three favorites. While they may not be considered a major threat to win the CFP, there is value in betting on their easier schedule and their +160 odds as the favorite to win the PAC 12.

As of now, #13 Utah is the only ranked team that USC has to face during their regular season and Utah has already suffered an early loss to the Florida Gators. Caleb Williams has proven that he can lead the Trojans with 874 yards and eight TDs in three games so far in his second year as the starting QB.

Since the beginning of the season, there have been three teams locked in as outright favorites to make the playoffs and there are a few teams that are worth betting on before their future odds shorten as well at sites with legal betting on college football.

Sites that have legal sports betting are on the same page as the CFP rankings, with the top three teams in the country having the top three best championship odds as well. However, there are inconsistencies for the next few betting favorites and ranked teams.

Michigan is currently ranked fourth in the country but has longer odds that both USC and Clemson to make the CFP. This is because Michigan has to face Penn State, Michigan State, and Ohio State before their regular season concludes.

Ranked at number five in the country, the Clemson Tigers currently have +170 odds to make the CFP but are not as efficient as they used to be in recent years. After giving up 20 points to the Louisiana Tech Bulldogs, concerns can be seen for Clemson to stop ACC opponents like Wake Forest in week four and Miami in week 11.