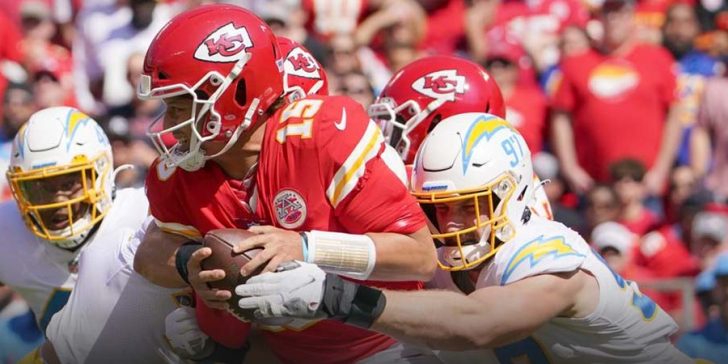 The Kansas City Chiefs and the Los Angeles Chargers face off during week 2 of Thursday Night Football.

The Chiefs are 3.5 favorites versus the Chargers and have gone 9-3 ATS in their last 12 games played and have had a spread record of 6-6 when playing as the home favorite during the 2021 season.
The TNF matchup has an over/under of 54.5 and the Chief have hit the over in seven of their last eight games played, including in week one against the Cardinals.
Patrick Mahomes and Justin Hebert both have odds with value for total passing yards and TD passes and are both tied with +700 for the second favorite to win NFL MVP.

KANSAS CITY, MO. – The Kansas City Chiefs and the Los Angeles Chargers are facing off for the first time during the 2022 season and the Chiefs have -200 odds and a 3.5-point spread to cover. The AFC West rivals split their games in 2021 and the Chiefs were favored in both but lost the game that was placed in Missouri.

There is value in betting on the Chiefs covering the spread in week 2, after covering their 6.5 spread over the Cardinals with a total margin of victory at 23 points. Over the Chief’s last 12 games played they have gone 9-3 ATS and went 6-6 ATS when playing at home as the favorite during the 2021 season.

Since the middle of last season, Kansas City has been sharp at home, winning eight of their last nine games SU. The Chargers gave struggled against the Chiefs over the years, going 3-13 SU in the two teams’ last 16 matchups.

Betting on the Total Points

These two teams tend to score a lot of points whenever they meet in the regular season and give value at legal betting sites to the total points over/under that was set for the Thursday Night Football event.

During the first week of the NFL season, the Chiefs covered the 53.5 over/under that was set for their Cardinals matchup with a total of 65 points scored. The Chargers did beat the Raiders in week 1 but hit the under on the 51.5 total with 43 total points scored.

When playing on the road, the four of the Charger’s last five games have hit the over and it has been hit in six of their last seven.

These teams are led by elite QBs who are currently tied at +700 for the second-best odds to win the regular season MVP at legal NFL betting sites and both have prop bets with value for their TNF matchup.

Mahomes threw for over 260 yards in both matchups against LAC in 2021 and threw three touchdowns in both games. Justin Herbert threw for 236 yards and two TDs in their first game in 2021 but went off for 281 yards and four TD passes during their last matchup of the season.

Each QBs Player Stats from 2021