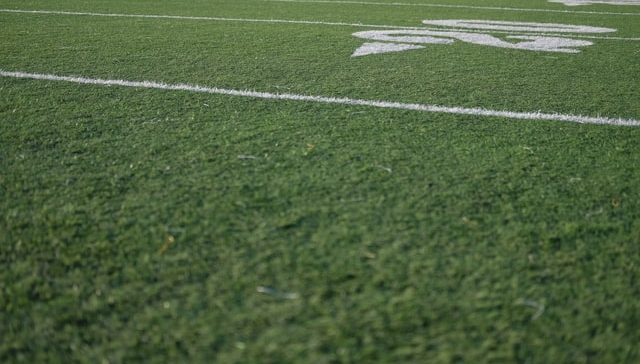 First round NFL draft pick out of Arkansas is getting “acclimated” to his new professional role with the Tennessee Titans, according to a recent report by ESPN.

With the 18th overall pick in the 2022 NFL draft, the Tennessee Titans selected Arkansas WR Treylon Burks – an acquisition made possible by a previous trade that sent A.J. Brown to the Philadelphia Eagles which allowed the Titans to move up in the draft.

Roughly one month after the pick, the Titans and their star rookie have begun workouts, but reports have also surfaced that Burks is striving to become “acclimated” to his new role with the professional football team, according to ESPN.

More outlets have covered questions surrounding the rookie’s conditioning in the past few days, but Tennessee head coach Mike Vrabel remains “excited” about Burks potential for a strong first season as a professional.

The heavily favored Titans were upset by the eventual AFC Champion Cincinnati Bengals in late January, and the team is in dire need of a solid all-around effort during the 2022 NFL regular season to ensure another shot at the Lombardi Trophy come this winter.

Conditioning has become even more important due to the extended 17-game NFL regular season that only grants the top-seeded team out of each conference a week off heading into the playoffs. The Titans had that advantage in early 2022, but lost by a score of 19-16 to the Bengals on a last-second field goal in the AFC Divisional round.

The number one ranked Division I NCAA college baseball team in the country – the Tennessee Volunteers – opened their postseason at Lindsey Nelson stadium in Knoxville with a 10-0 shutout win over the Alabama State Hornets.

A Saturday night showdown against the Campbell Fighting Camels out of North Carolina resulted in the Vols advancing to the championship round of their own regional tournament, which is a double elimination event. Following an early scare in which the Fighting Camels went up 4-0 in the bottom of the 3rd Inning, the Vols came up with seven runs in the middle stanzas and ultimately won the contest 12-7 thanks in part to a 4-run ninth inning..

One more victory will ensure Tennessee advances to the Super Regional, which will be a best-of-three series against the Statesboro regional winner – most likely the Georgia Southern Eagles at this point.

The Campbell Fighting Camels will play the Georgia Tech Yellow Jackets Sunday to determine who will play against the Volunteers in the Knoxville regional championship.

However, in order to make it past the regionals this year, the ‘Dores will be required to win two games in a row against the #3 ranked team in the country – the Oregon State Beavers – in Corvallis.

Eight teams in total will make it to the 2022 College World Series in Omaha, Nebraska.

The Oklahoma Lady Sooners are a heavy favorite to capture this year’s Women’s College World Series Softball championship. They easily defeated the Texas Lady Longhorns Saturday afternoon and will compete against Oklahoma State in the winner’s bracket of the 2022 WCWS.

NBA Finals Action Attracts Betting From Across The Country

The Boston Celtics completed a double-digit 4th Quarter comeback to win Game #1 of the NBA Finals against the Golden State Warriors in San Francisco.

Tip-off for Sunday’s Game #2 is scheduled at 8:00pm Eastern Time at Chase Center. Games #3 and #4 will be played in Boston at the TD Garden.

Legal online betting for residents and visitors who are physically located in Tennessee’s borders is available at all major TN sportsbooks. Point spreads, moneylines, per-period bets, and even cross-sports parlays are available now for TN sports bettors who sign-up for a new account through TNBets.

Both the Colorado Avalanche and New York Rangers are leading their respective conference championship series by a tally of 2-0.

The Edmonton Oilers and Tampa Bay Lightning will need to come up with some victories soon, or else it will be the Avalanche vs. Rangers in the 2022 NHL Stanley Cup Finals.

Check out our exclusive TNBets Sports Betting Guide if you’re in Tennessee and want to register for a new online sportsbook account. As long as you’re at least 21 years of age and located within the Volunteer State’s borders, you can sign-up for a legal online TN sportsbook account easily and begin to place real money wagers on your favorite sporting events and teams immediately.Deposits and withdrawals are made easy in the legal TN online sports betting market.