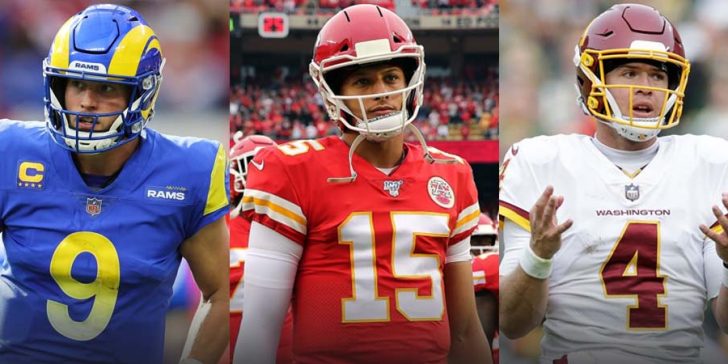 LOS ANGELES – As the 2022-23 NFL season continues to approach, there are different odds that have begun to get released. One, in particular, are the season win totals for each team in the league.

Different ways to gauge the season win totals is by looking at the strengths of schedule for each team in the upcoming season as well as what the game lines are for each game. Three teams whose win totals should have an eye kept on them are the Los Angeles Rams, Kansas City Chiefs, and Washington Commanders.

The Los Angeles Rams were given the third-highest win total of the season on legal online betting sites despite having the toughest schedule for the upcoming season. Their opponents have a combined 164-125 record from last season which could sway some to take the under.

However, the Rams are still the defending Super Bowl champions and did make some beneficial offseason moves to remain contending. Also, oddsmakers have been extremely friendly to the having listed them as the favorites in 12 games for the upcoming season.

One of the teams that they are listed as an underdog to are the Tampa Bay Buccaneers, who they have beaten in three straight seasons since Tom Brady joined them in 2020.

The Kansas City Chiefs are going into the season also with the third-highest win total and with the fifth toughest strength of schedule as their opponents went 154-135 last season. The Chiefs NFL odds are favored in 13 of their games this season. However, after a shaky offseason that saw them lose Tyreek Hill, Tyrann Mathieu, and Charvarius Ward amongst other key free agents, it could be a sign to take the under.

The AFC West got a lot tougher as each of their division rivals made key offseason moves, they are also matched up with the NFC West this season, arguably the toughest division in the NFL.
They also have single games against the Buffalo Bills, Tampa Bay Buccaneers, and Cincinnati Bengals to worry about – all of which are possible losses.

Although the Washington Commanders have plus odds on the over, they were given the friendliest schedule of the season with their opponents combining for just a 133-155-1 record last year. The Commanders are looking at underdog odds though in 9 of their 17 games though.

Luckily for Washington though, along with being in one of the weakest divisions in the NFL, they are matched up with other weak divisions such as the AFC South and NFC North. That includes games against rebuilding teams in the Detroit Lions, Chicago Bears, Jacksonville Jaguars, and Houston Texans. Not to mention, they have an out of division matchup against another rebuilding team in the Atlanta Falcons.

Realistically, all of their games are winnable games this season and with Carson Wentz being their best QB in years, if he can stay healthy, they can certainly cash those longer odds.