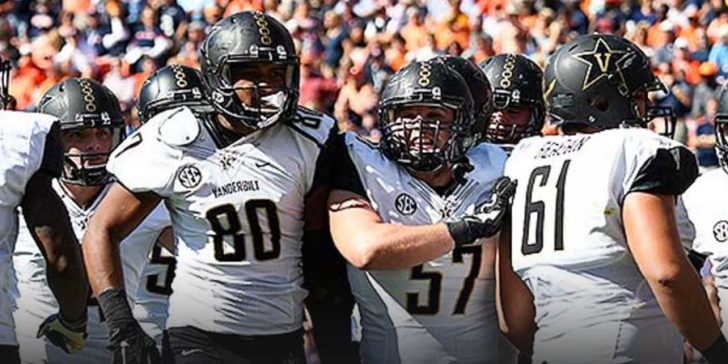 The Vanderbilt Commodores, Arizona Wildcats, and Kansas Jayhawks each have 2.5 win totals set for the 2022-23 season.
Vanderbilt has +110 odds to go over 2.5 wins.
Both Arizona and Kansas are favored to go over with -145 and -170 odds.

NASHVILLE, Tenn. – College football win totals can get intense if they are set correctly. However, in some cases win totals are set extremely low leaving tons of room for teams to hit the over, but can be considered a trap bet.

This season, three teams with the lowest win totals are the Vanderbilt Commodores, Arizona Wildcats, and Kansas Jayhawks – who each have their win totals set at 2.5. Vanderbilt is the only team of the three that is favored to stay under the win total.

Of these three teams, Vanderbilt is in the toughest position given the conference that they play in. Vandy plays in the SEC which is arguably the hardest football conference in the country.

For example, on their schedule this season, they have games scheduled against both Alabama and Georgia which can already be considered losses.

The Arizona Wildcats are another team that has stayed under a 2.5 win total in the last two seasons. They have an extremely similar schedule to last season aside from their two non-conference games where they’ll play North Dakota State and Mississippi State.

If their season plays out like last season, they could be staring at just one win as Mississippi State is one of the better teams in the SEC. Their one win could come against North Dakota State, as they are an FCS team.

Looking at how they’ve done with previous win totals, those looking for an easy profit should be taking their under. Since 2010, they’ve stayed under their projected win total eight times including the last four seasons.

The Kansas Jayhawks are the definition of a basketball school as their football program has absolutely nothing going for them. Even at a 2.5 win total, it is still generous of oddsmakers and the fact that they are favored to go over 2.5 is comical.

Over the last 12 seasons, they have done horrible against a 2.5 win total having stayed under in eight of those 12 seasons. Their recruiting ranks dead last in the Big 12 with zero four of five-star recruits and just six three-star recruits.

They are also coming off of a season that allowed opponents to score the most points in the conference at 42.2 ppg and they also scored the least amount of points as well at 20.8 ppg.