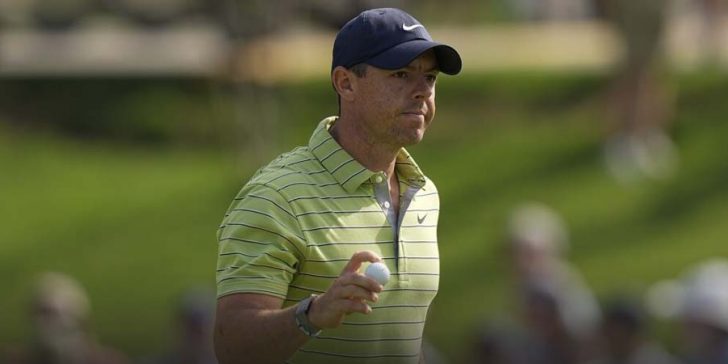 TULSA, Okla. – Coming off a dominant first-round performance, Rory McIlroy is the favorite to win the PGA Championship.

One of the key storylines at the PGA Championship has been the weather which has given a huge advantage to golfers that were part of groups that teed off Thursday morning and then tee off Friday afternoon. According to CBS Sports, that Thursday morning/Friday afternoon group faced winds that averaged eight mph on Thursday and may deal with winds of roughly 11 mph on Friday.

The golfers that instead had to tee off on Thursday afternoon and then Friday morning faced 13 mph winds and 18 mph winds. That advantage given to a golfer in the Thursday morning/Friday afternoon group showed up on the leader board after Round 1.

A few of the top golfers in the world that were given the weather disadvantage were able to battle through it on Thursday, but it is very clear that PGA sportsbooks believe the wind will be a factor on Friday.

Will Rory Three-Peat At The PGA Championship?

With the weather seemingly wiping half the slate from contention, Rory McIlroy has never been a better bet to win another Major championship.

Five under par through Round 1 was an excellent start, and legal sports betting sites have given him a great chance to take home the Wanamaker Trophy.

Even after going five under it may seem unfair to imply he left some shots out there, but he did bogey twice in his last four holes (he birdied one as well). It makes a lot of sense that Rory comes out on Friday, attacks the course, and potentially separate himself from the pack. If he does that, his 3-1 odds will surely shrink.